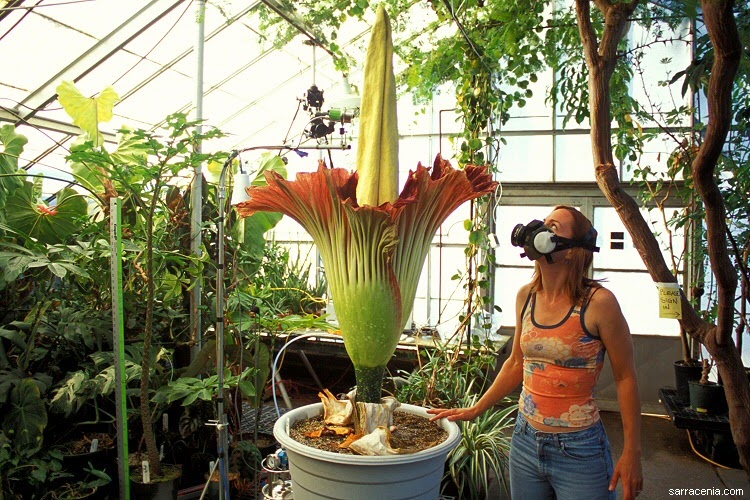 The titan arum grows in the wild only in the equatorial rainforests of Sumatra, Indonesia. It was first scientifically described in 1878 by Italian botanist Odoardo Beccari. The plant flowers only infrequently in the wild and even more rarely when cultivated. It first flowered in cultivation at the Royal Botanic Gardens at Kew in London, in 1889, with over 100 cultivated blossoms since then. The first documented flowerings in the United States were at New York Botanical Garden in 1937 and 1939. This flowering also inspired the designation of the titan arum as the official flower of the Bronx in 1939, only to be replaced in 2000 by the day lily. The number of cultivated plants has increased in recent years, and it is not uncommon for there to be five or more flowering events in gardens around the world in a single year. The titan arum is more commonly available to the advanced gardener due to pollination techniques.

The popular name 'Titan arum' was invented by the broadcaster and naturalist Sir David Attenborough, for his BBC series 'The Private Life of Plants,' in which the flowering and pollination of the plant were filmed for the first time. Attenborough felt that constantly referring to the plant as Amorphophallus on a popular TV documentary would be inappropriate.


In 2003, the tallest bloom in cultivation, some 2.74 m (8 ft. 11 in.) high, was achieved at the Botanical Garden of the University of Bonn in Germany. The event was acknowledged by the Guinness Book of Records. On 20 October 2005, this record was broken at the botanical and zoological garden Wilhelma in Stuttgart, Germany. The bloom reached a height of 2.94 m (9 ft. 6 in.).

This is a short description in the author block about the author. You edit it by entering text in the "Biographical Info" field in the user admin panel.
«